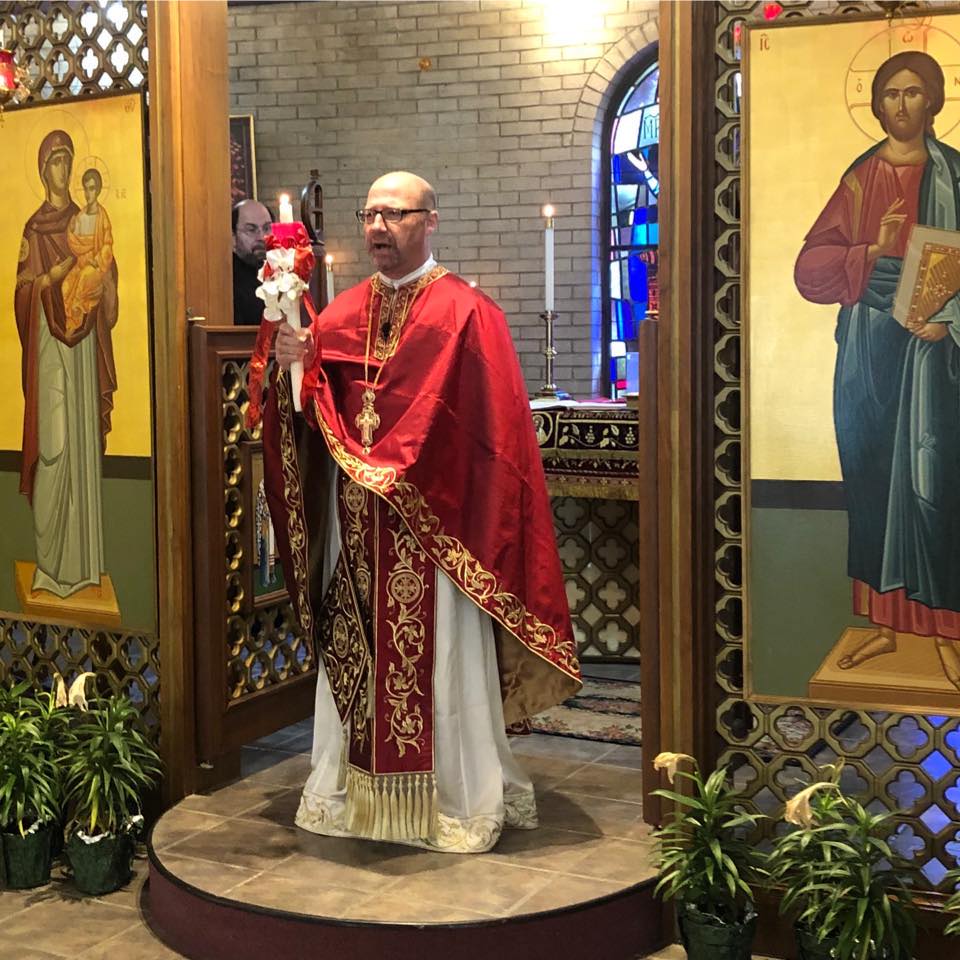 Fr. Soterios Rousakis is the eldest son of Rev. Fr. James and Presvytera Vasiliki Rousakis and was born on August 11, 1972, in Atlanta, GA. Since his father is a priest, he moved to different cities from time to time, leaving Atlanta, GA for Portland, ME, Indianapolis, IN and finally Clearwater, FL, In 1975, while living in Portland, ME, a second son was born, Leonidas, prior to the family moving to Indianapolis. In Indianapolis, Father Soterios spent 14 years of his life and from his early teen years was active in GOYA, serving as President in his senior year, attended Greek and Church School, captain of the Altar Boys and a team member of the Church Basketball Team, receiving several All-Star awards. Upon graduation, Father matriculated at Hellenic College in Brookline, MA., where he was very active in the college community from the beginning, serving continuously as a member of the Student Government Association and Vice-President of his class. When he entered Holy Cross Graduate School of Theology he worked in the Office of Student Life for all the three years. Father has a great deal of experience in youth work beginning as a student, participating in retreats and summer camps, which was a great training for his priesthood. He worked at Camp Good Shepherd at St. Basil’s Academy for a year as the Assistant Director and spent many years from camper in his youth to a staff member at the Detroit Diocese Summer Camp. After graduating in June of 1998, he was ordained a Deacon on October 25th in Perth Amboy, NJ, by the Archbishop Spyridon and celebrated his first Divine Liturgy with his father at Holy Trinity in Clearwater, FL, on October 26th, St. Demetrios, his father’s feast day. A week later, Deacon Soterios was ordained a priest at his home parish in Clearwater, FL, by Metropolitan Alexios of Atlanta. His Eminence assigned him as Assistant Priest at Holy Trinity/Holy Cross Greek Orthodox Cathedral in Birmingham, Alabama, where he served for 3 ½ years before being transferred in July 2002 to St. Paul Greek Orthodox Church in Savannah, GA, serving for two years. In Birmingham, he began a GOYA Volleyball Tournament, which became very popular and still exists today. During his time in the Atlanta Metropolis, Father Soterios was the representative for the Metropolis to the Alumni Association of Hellenic College/Holy Cross. In July 2004, he was transferred to St. Nicholas Greek Orthodox Church in San Jose, CA, as the Assistant Priest, serving for seven years. During this time, he developed many youth programs for the parish, began a GOYA and an Adult Volleyball Tournament, which continues to function. He also served as the Father Commissioner of the OYAA (Basketball League) of the Metropolis of San Francisco for six years. On October 1, 2011, Fr. Soterios was assigned as the Interim Pastor of the St. Basil Greek Orthodox Church in Stockton, California, where he served for 10 months. From November 2012 to March 2018 Fr. Soterios served as the Proistamenos of the St. Stefanos Greek Orthodox Church in St. Petersburg, FL. Father Soterios has three children, Vasiliki, 17; Chris, 15 and Demetri, 14. He enjoys spending time with his children, playing golf and basketball. Father believes that the Orthodox Church has a great treasury that needs to be continuously shared with the faithful, and with hard work and dedication, he will continue to strive in sharing that treasury